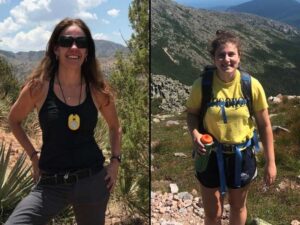 Shaya Tousi: Can you give some background on how this project came about? Is it related to other work you’ve been involved with at the College of the Environment?

Helen Poulos:  Actually, Barry [Chernoff] has worked with these conservation partners with me for a long time, as well, and I have been working with World Wildlife Foundation and some colleagues at the Big Bend National Park for some time now, trying to understand how different kinds of management have influenced the aquatic or riparian vegetation on the river. We have a paper in review right now that looks at the treatments against invasive species. They’ve done a variety of different kinds, like burning, herbicide, mowing, and those types of things to try to control giant cane (arundo donax), an invasive grass or riparian grass that outcompetes native aquatics like bakaris and willow. In an effort to understand changes in the river, the GIS specialist, who’s one of my good friends, Jeff Jenfrow, who runs Rio Bravo Restoration, basically paddled 700 miles of river and took vegetation measurements with a scope mounted on the bow of the boat, on the Mexican side of the Rio Grande, and then on the US side every two minutes, for 700 miles. He and his team basically identified the first four species they saw in both directions. They did that in 2016, then again in 2019. So I had this massive dataset, but I didn’t have the time or mental capacity or money or effort to be able to do that kind of work. Then Ally Detre came to me at the end of last semester and said, “Hey, I’m interested in doing some research with you.” So we applied for a faculty-student research grant from the College of the Environment, and Ally has been working with me since the fall, wrangling this dataset.

Tousi: Could you say more about how the COE faculty-student research grant has benefited both you and Ally?

Poulos: The faculty-student research grant is a really great opportunity for students. In this case, because it allowed Ally and me to have this experience and make progress together this year and allowed Ally to work on her data for her thesis. I’m also grateful that Ally applied for and received a COE summer fellowship, which has provided her with the opportunity to actually travel to the site this summer, and have a real hands-on field experience!

Tousi: Ally, could you explain how the data is set up, and what kind of work you’ve done with it so far?

Detre: It’s organized by coordinating the 2016 and 2019 steps for each measurement of the vegetation. I went through and made sure that every entry had an observation for both Texas and Mexico for both years. There are [around] 2,500 observations, so over winter break and for much of the fall I went through that. [After] I got that done, using that dataset that had been cleaned and organized, we made a presence-absence matrix that was much easier to deal with when we put that into statistical analysis in R. We also added eight entries for types of treatment, like Professor Poulos was saying before—the burning, mowing, etc.

Poulos: Ally spent a lot of time in QGIS, looking at aerial images of the river. Because the points weren’t exactly paired, because they’re taken every two minutes, you could tell that they were sort of taken at the same space. So she spent all this time joining all 2,500 of those observations from space. Different regions of this river have been treated at different times, so she basically created this very sophisticated multivariate database that then also has which four species were present for each point across the whole river, for those two different times. The goal of the work is to try to understand how the plant community has changed over time, and to figure out how regions of the river that are treated, or have been treated multiple times, or have been treated in different ways, or are just really far away, differ from each other. The “great unknown” is the reach of the river that you might imagine is far from everybody, right? It takes about 21 days of river days, with no resupplies, to do this work. This faculty research grant let me work with Ally to do a bunch of processing for a paper that’s going to end up her thesis.

Tousi: That’s very exciting! Ally, where do you see this research taking you beyond your thesis? Is it related to other things you’ve studied at Wesleyan?

Detre: For a while I’ve known that I wanted to get into research and see what it’s like and how I like it as a potential option for after Wesleyan. This was the perfect project, and I definitely wanted to get into some kind of fieldwork, which is what I’m going to be doing in Texas.  It’s super exciting—just dipping a toe in, seeing what it’s like, and getting some experience before I go on after Wesleyan into the workforce and have a career, that kind of stuff. [laughs] In general, throughout my classes I’ve really liked looking at changes and at how the world works ecologically. Both of these[themes have been my favorite classes and favorite things to talk about. It’s just really interesting to me,  and I’m excited about it.

Poulos: Thanks to a COE summer fellowship, starting this month Ally will be doing a lower canyons trip with several of my colleagues, where they’re going to be doing the same kind of vegetation surveys. She’ll get to really know what the landscape looks like and what the plants look like. It’s actually a trip that they’re doing with some other scientists, Kevin Urbanczyk and some others from Sul Ross State University. She’s going to learn how to do water sampling and a whole bunch of other measurements on the trip, and then she’s going to be with my friend Marie Landis at Big Bend National Park.  Marie is the GIS specialist who took a lot of these data. Ally will be working with her for the summer, not only working on this GIS project, but also on an invasive grass monitoring project that Big Bend National Park is doing. They’re trying to use remotely sensed data. Ally doesn’t know the details of this, she’s finding out right now for the first time! [Laughs] Buffalo Grass is an invasive grass that has invaded a lot of the desert and grasslands throughout the southwestern United States and Mexico. They’re trying to figure out some better detection and ranging methods, so Ally is going to work with me and Marie to try to build some better predictive mapping tools to do that, especially in some of these very remote regions of the Big Bend National Park, where there aren’t trails and things like that, so that they can then target eradication efforts.

Tousi: Ally, this is the first time you’ve participated in research at Wesleyan. How has the experience been for you, and what kinds of expectations did you have for participating in research alongside professors and scientists?

Detre: It’s been great! I’ve learned a wide variety of skills, like GIS and programming in R. It’s cool to learn about all the steps and skills that you need along the way. In terms of expectations, I assumed that it was going to be a lot of trial and error and hard work. But trying things that work has been great. I like problem solving, puzzles, anything like that, so it’s something that I enjoy and that I’ve enjoyed thus far.

Poulos: One other thing I was going to mention is that this faculty-student research grant opportunity is something that’s been doable for sure during COVID. Obviously Ally and I would have met more in person, and maybe we would have made more progress, but it definitely allowed us to move forward. This semester, and this year, has been super crazy and intense for everyone, so it was kind of nice to just let Ally do this work and then touch base when we were able. She’s worked hard, but hopefully it hasn’t been too overwhelming!

Detre: No, it’s definitely not been overwhelming–it’s been great!

Tousi: Professor Poulos, you’ve worked with a lot of students on research. What types of projects do you think students benefit from working on, and why do you think it’s valuable to involve undergraduate students in research?

Poulos: As of last fall, I think I’d worked with 25 students or something, and in spring 2021 I had five more. For me personally, it’s just been this really nice opportunity to bring students in, train them up, and turn them into scholars. For example, I worked with senior Gabe Snashall in spring 2021 and we just published a paper together–and his thesis was actually on a totally different topic! And now, we have Ally on this project. She’s going to go have this amazing, amazing life experience–a real, intense life experience! It’s totally different than any classes here. She’s going to work together with two Wesleyan sophomores and make a great thesis out of it, and hopefully we get the paper published. I just love being able to have these kinds of experiences with students!