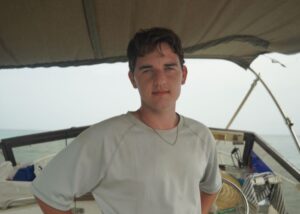 Every year, the COE awards fellowships to fund summer research opportunities for Wesleyan students across all majors and class years. Joel Rader ’23 is a film and environmental studies major who spent summer 2022 investigating how resilience has been “seeded” within the social-ecological system of the island of Culebra, Puerto, Rico, in the wake of the devastation wrought by hurricanes Irma and Maria. To view Joel’s amazing fellowship project website, click here!

Tell us about your summer research project!
My project explored the island of Culebra, Puerto Rico, as a Social-Ecological System (SES), including the integral contributions to SES resilience made by small business owners, activists, scientists, and environmentalists. The project focuses in particular on the significant work that the nonprofit organization Sociedad Ambiente Marino (SAM) does toward resilience efforts in Culebra.  SAM’s efforts are not just important for the Culebra SES itself, but could be a replicable model for other island communities throughout the Caribbean that are among the most exposed to climate change impacts today. Among SAM’s important current projects is the restoration of endangered coral species that are important to this region of the Caribbean.

Your research this summer built on the research you conducted as a COE summer fellow in 2021. Tell us about your first COE summer research fellowship and how that experience led to this one.
My first year allowed me to lay all the groundwork for my research and for the filming I would do in the first and second years. In particular, I was able to solidify ideas about and get a significant amount of footage for a short documentary about community resilience efforts on Culebra. In summer 2021, I spent six weeks living on the island and made many connections and friendships that helped me to focus my project and move it forward. As a result, the leaders of SAM invited me back in summer 2022 to serve as a film intern for the organization and to also create a SAM promotional video using interviews and footage I shot. 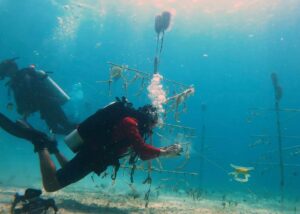 Was there a particular experience or person that sparked your interest in island community social-ecological resilience and the rapid decline of coral reefs? Why did you choose Culebra, Puerto Rico, as your research location?
I was intrigued by Culebra after reading about the island and its history. I also thought as an exposed satellite island to the Puerto Rican mainland it likely has a lot to teach about withstanding the effects of climate change. It is, literally, on the front lines of, for example, increased hurricane intensity and occurrence.

Once on the island, I met marine biologist Erik Velez Ortiz, who convinced me of the importance of the coral reefs and the urgency of restoring them. I did several video interviews with Erick and his voice is the main one that drives forward my short documentary, with the working title Seeding Resilience. Now in post-production, the documentary follows Erick and his work with SAM, which is leading the first and largest coral restoration project in the Caribbean.

COE summer fellowships give Wes students the opportunity to explore enviro-related topics of interest. What did you hope to accomplish this summer…and what did you accomplish?
My focus this summer was to build on the relationships, research, and footage from summer 2021 to complete Seeding Resilience, as well as to serve as a video intern for SAM and work with SAM staff to produce a SAM promotional video in English. I was able to accomplish both of those goals. In addition, I created a website with various photos, video clips, interviews, and research about my project at joel-rader.com/coefellowship. 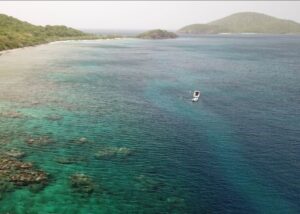 What was the biggest challenge you faced in completing your research project – and how did you overcome that challenge?
The biggest challenge was establishing reliable connections and sources on the island of Culebra last summer (2021). However, much to my benefit, I had at least a few contacts before traveling that made progress on the project possible.

How did this experience change you, personally, and/or impact your academic or post-academic plans, moving forward?
On the island of Culebra and within the nonprofit organization I worked with, I was able to establish a network that I believe will last far beyond Wesleyan. In fact, I plan to return to Culebra later this year or next year with a diving certification in order to continue working with and filming for SAM.

Any words of advice for other Wes students who might be interested in applying for a COE fellowship?
Make sure to recruit a faculty mentor that is committed to your project and to you as a student. My faculty mentor, Assistant Professor of Film Studies Sadia Quraeshi Shepard, was a huge help in all phases of my fellowship project. She had helpful ideas and suggestions at every turn. Her experience, creativity, and commitment to the mentoring role made such a difference!