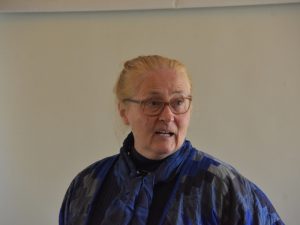 On April 29, the College of the Environment welcomed Olga Jonas, a senior fellow at the Harvard Global Health Institute, for a presentation on “Pandemics, AMR and Other Microbial Threats: One Health Approaches to Mitigate the Risks in Developing Countries.” Prior to her current position, Jonas worked at the World Bank, where she coordinated the operational response to avian and pandemic flu threats and, with the UN and others, was responsible for monitoring the global response since 2006.

Jonas began her presentation by reminding the audience that many modern-day risks to public health are anthropogenic in nature, growing, and threaten young people and developing countries in particular. In fact, said Jonas, young people face steadily increasing odds of experiencing a severe pandemic, based on examinations of both history and microbiology that predict an “optimistic” outlook of an increase of 1 percent chance per year of a breakout. “Think about 60, 70 years from now,” said Jonas. “Today’s young people will have to face that huge threat.”

Because the typical path for pathogen spillover is from wildlife to livestock to humans, said Jonas, there is a need to protect developing countries that have a high concentration of the world’s livestock, since those populations live in much closer contact to livestock and their pathogens. “Microbes don’t care about borders,” Jonas said. “Lowering pandemic risk helps the people in the world who are disproportionately at risk . . . they are the front lines.”

Jonas outlined the three variables that affect pandemic impacts: surprise, reaction time, and behavior. She explained that a well-prepared society can quickly catch and eliminate microbial threats, even preventing them from forming at all. Thus, the more surprised a society is by a pandemic, the greater the potential damage. This ties into reaction time, which dictates that the slower a society is to react to a crisis, the more time it has to spread. Finally, human behavior has a large role in spreading pandemics, said Jonas, from air travel spreading pathogens across continents to people staying inside to avoid a disease spreading through a small neighborhood.

After establishing the facts of the risk of pandemic, Jonas tackled the question of whether it was worth investing in lowering that risk. Potential economic damage of a major pandemic is estimated at $80 billion a year, said Jonas, putting it on par with risk estimates for climate change. In contrast, the cost to develop, implement, and maintain One Health systems in 139 developing countries such that they meet World Organization for Animal Health (OIE) and World Health Organization (WHO) standards is $3.4 billion per year. “Think of it as an insurance premium,” she said. “No one would turn that rate down—except, we are.”

Having discussed the need to improve health systems, Jonas explained in detail the CDC’s One Health approach. “Human and veterinary public health systems have holes which pathogens take advantage of,” she said, emphasizing weak points at “junctures” where the two systems brush borders. Overlap can result in confusion about which system is responsible for what, leaving systems weak and fault-prone. The One Health approach aims to lower the risk of failure at those joints between human and animal health by deliberately managing them within the context of the entire system, rather than viewing the human-centered and animal-centered systems as separate.

Some scientific and cultural progress has been made towards embracing the One Health approach, said Jonas, but she reminded the audience that many groups need much stricter oversight, mentioning pharmaceutical companies that allow several points of entry for AMR into the farming industry. Furthermore, the infrastructure to implement the One Health approach does not exist in many developing countries, said Jonas. Weak capacity for veterinary care precludes the option of stopping a disease at its source, resulting in what Jonas describes as a “black curtain” over the beginnings of a pandemic, which slows response time and efficiency by outside organizations.

At the global level, Jonas imagines One Health will function as a “standard setting” for human and veterinary care, maintained by intergovernmental authorities. “We must avoid a tragedy of the commons,” said Jonas. The urgency of the potential threat, she argues, demands our immediate and rapt attention: the clock is ticking, and every year the chances of a pandemic increase. For young populations and populations in developing countries, Jonas believes the One Health approach could be a safeguard against that risk.