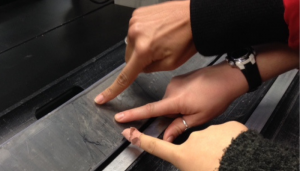 This past January, Nethra Pullela ’20, Liz Atalig ’21, and Jackie Duckett ’20 joined E&ES Professor Suzanne O’Connell on a journey to the center of the earth–traveling to  the International Ocean Discovery Program (IODP) at Texas A&M University to collect data and samples for O’Connell’s “Where Was the Antarctic Oligocene Ice?” project, funded by the COE’s Faculty-Student Research Grant Program. 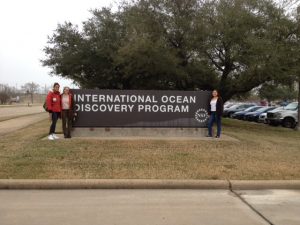 Tell us about your research program!
Suzanne O’Connell: Team Antarctica is researching the stability of the East Antarctic Ice Sheet (EAIS) using sediment cores from the Weddell Sea. This is the part of the Antarctic ocean that connects with the Atlantic Ocean. Two intervals of time are being examined. The Pliocene (2.58-5.33 million years ago (Ma)), when atmospheric CO2 levels were similar to today but the temperature was~ 1oC warmer; and the Oligocene (33.9-23 Ma), when there may or may not have been Antarctic ice. For this research, students are looking at the volume and composition of sand-size sediment that was dropped by melting icebergs, the amount of biosilica, which is a proxy for productivity, and overall changes in the sediment chemistry.

The overall object of my research program is to understand the stability of the East Antarctic Ice Sheet (EAIS) by using specific characteristics of marine sediment. The marine sediment records what is happening on land and is more continuous than land records, which are commonly disturbed by surface processes such as rivers and glaciers. These cores have characteristics of the sediment core that can tell us if the ice sheet was expanding or contracting and where in Antarctica the sediment was coming from. 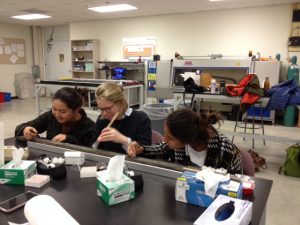 Cores that have been recovered over the past 50 years of the IODP program are kept in refrigerated storage and available for research. On this trip we were completing work on a project that is ending, examining cores from the Jane Basin, which is off the northeastern tip of the Antarctic Peninsula, and beginning work on a new project off the coast of Dronning Maud Land adjacent to the Antarctica continent. Both locations are in the Weddell Sea. We measured the composition of some of the cores from the Jane Basin, using a technique called core-scanning XRF. We also took samples from a section of core from Dronning Maud Land that were deposited between about 34 and 14 million years ago, and checked the quality of those cores for additional XRF measurements.

Why is this work important?
SO: During the periods of time we are studying, the Earth was warmer than it is today. But, by the end of this century, Earth may be as warm as some of the past times that we are studying. Ice sheet dynamics directly impact sea level and influence ocean circulation and climate. We need to know more about these changes and how fast they occurred, to prepare for the future.

How did Nethra, Liz, and Jackie get involved?
SO: One of the aspects of my work that students love is that they become part of a large international research organization addressing fundamental questions about the Earth. Each student got involved in a different way. Nethra was in a class and we got talking about research and she decided to join my group. I met Liz at the WesMASS orientation and after talking with her, asked if she’d like to join my group. Jackie approached me. There are lots of ways to get involved in my research.

What’s next?
SO: We are working on the samples right now and a new student, Donglai Yang, has joined the group. We are separating the sand size grains, which may have been deposited by icebergs, from the silt and clay. Then from the sand size grains we’ll hand pick specific minerals to age date. That will give us an idea of where the grains came from and can be used to identify which parts of East Antarctica were glaciated. We’ll also measure the chemistry of the samples, looking for changes in source area and past surface ocean productivity.

If the XRF core scanner is available in June, we may return and measure some of the Dronning Maud Land cores, but it’s difficult to get time on the core scanner. I’ll be returning to the area on Expedition 382 (Iceberg Alley) and be on the drilling ship, the JOIDES Resolution, from March 20-May 23.