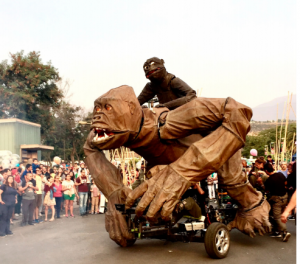 Associate Professor of Theater Marcela Oteiza’s research has just been published in the Journal of Theatre and Performance Design. The article includes text and photos from Wesleyan students who participated in the study abroad winter session 2018– including the photo above, by Jose Luis Sanchez. Street Theatre and the Scenographic Gaze: Santiago a Mil International Festival, January 2018, is available now.