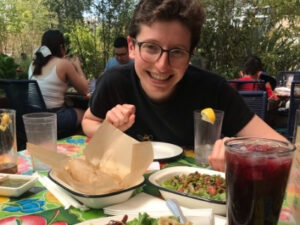 Every year, the COE awards fellowships to fund summer research opportunities for Wesleyan students across all majors and class years. Megan Levan ’22 is an environmental studies and South Asia studies in a global context (university major) major who was recently elected Wesleyan’s Gamma Chapter of Phi Beta Kappa. Megan’s research this summer centered on how edible insect-based products are being promoted by companies and received by consumers in countries not known for their entomophagic practices. Megan believes diets of the future will need to be supplemented with other available protein sources, and her research explored how insects fit into the picture.

You spent the summer working on your thesis: researching how edible insect-based products are being promoted by companies and received by consumers…and sampling some tasty critters along the way. Tell us about your thesis!
This summer I worked on research for my thesis that focused on entomophagy (eating insects) in the United States and other generally bug-averse cultures. Although entomophagy is very common in many other countries, it has yet to really take off in the United States. Edible insects are gaining attention as a sustainable protein option and have been deemed by some to be the “protein of the future.” Through my research, I aim to assess the current status of entomophagy in the United States and to uncover the most effective ways to market edible insects in the U.S. and other generally bug-averse cultures. I spent the summer interviewing CEOs of various insect-based start-ups, chatting with cricket farmers, learning from chefs that cook with insects, and, of course, eating grub(s)!

How did you get interested in entomophagy?
I first crunched a mealworm when I was 9 years old. I was at the San Diego Zoo’s Dr. Zoolittle show and I’d been called to the stage as one of the brave volunteers who would prove the crunchy existence of the mealworm’s exoskeleton by amplifying my chomping sounds through the microphone. To my surprise, it was quite tasty and eating bugs quickly became my party trick—after that I always volunteered at the zoo and I brought the occasional box of mealworms to school to show off to my friends. During my sophomore year of college, I began to learn more about the huge environmental benefits of eating insects in my “Conservation in Africa” and “Liminal Animals” classes. By the end of the semester I had produced two final papers largely focusing on the topic of entomophagy as it related to both of my courses–one a case study of mopane worms in South Africa and the other examining the “ick factor” associated with bugs, whether used as food or seen as vermin. My hunger for insects still wasn’t fully satiated, though, and that is what inspired me to write my senior thesis about entomophagy.


Tell us about the two guiding questions of your thesis and what you learned this summer.
Through my research, I hoped to begin to answer the guiding questions of my thesis: Is an entotarian diet (entotarian or bugitarian are two words I’ve learned for describing a diet that includes insects as the sole animal-based protein) accessible and sustainable for Americans given our current resources? If not, how can the U.S. and other generally bug-averse cultures make entomophagy accessible and sustainable for all those who choose to eat insects? Although these questions are huge, I do feel as though I am on the cusp of an answer to the first one. Insect-based protein powder and snack start-ups are breeding like crickets (aka really quickly!), but the industry hasn’t grown big enough yet to move production close to home. Insect dishes that I found in restaurants and insect-based snacks that I purchased online were quite pricey and oftentimes the insects themselves were imported great distances to make their way to my plate, making my crickets’ carbon footprint disproportionately large given their ability to be farmed using incredibly few resources. Of course, it will take increased interest in entomophagy to encourage U.S.-based insect farmers to start producing human-grade insects and that will happen over time as insect-eating gains popularity and people see that insect farming can be a lucrative business. Plus, when compared to other traditional American animal proteins, even with the additional carbon footprint, insects still use comparatively so far fewer resources that a serving of crickets has a much smaller environmental impact than a serving of beef.

As for my second research question, much remains to be discovered. It is clear that for entomophagy to become a part of American culture, more people need to start eating insects. Many American insect-based start-ups market to athletes who desire a sustainable, high-protein superfood to keep them going. This seems like a great way to get some well-known people to advertise the benefits of eating bugs. Still, with such strong societal aversion to eating insects, many of my interviewees stressed the importance of getting kids excited about eating insects before they are caught up in the “ick factor.” As I continue answering my research questions this year, I plan on looking into effective ways to give children the opportunity to experience entomophagy.

What was the most rewarding part of your COE summer fellowship experience?
This summer I found a multitude of great resources and a strong community of people who are just as passionate about eating insects as I am. I really enjoyed speaking with all of my interviewees. They all had different insights into the world of entomophagy, but what they all had in common was that they were extremely generous with their time and seemed very excited to share their knowledge with a fellow entomophagy enthusiast. Everyone I interviewed was incredibly kind and they typically went out of their way to help connect me to other contacts who might be able to give me different perspectives. Apart from making many new bug-loving friends, I also had a great time eating so many new insects! Some of my favorites of the summer included cicadas, black ants, and grasshoppers.

What was the biggest challenge you faced and how did you overcome it?
It was quite challenging to find restaurants that served insects. Oftentimes, upon calling a restaurant that was reported to serve bugs, I would find out that they had removed the insect-based dishes from their menu (sometimes due to menu simplification during COVID) or that they had gone out of business entirely. There were a few instances where I sat down and tried to order an insect-based dish only to find out that they didn’t usually have that dish in stock. I would love to see more insect availability in restaurants in the future, as I feel that it is a great way to allow people to try eating bugs in a very comfortable setting. In the meantime, though, the lack of restaurants offering insects inspired me to cook up my own. I purchased both live crickets and roasted ones and experimented in the kitchen. Learning how to process and prepare live crickets in the most humane way possible was an especially interesting experience. Although it is still not possible in the U.S. to have human-grade crickets shipped live to your house (because there simply aren’t many local human-grade cricket farmers yet), the pet-grade crickets that I cooked up turned out delicious and all of my friends and family who tasted them agreed!

How did this fellowship experience change you, personally, and/or impact your academic or post-academic plans, moving forward?
I have made some really great connections through all of the interviews I have conducted which I hope will aid me in the future when it comes to getting a job in the realm of entomophagy. Everyone I interviewed showed me different pathways  I could potentially take after graduating to work in this industry. After this summer, I am fairly certain that I would love to be a cricket farmer or work for one of the many amazing insect-based food start-ups. Perhaps I may just start some cricket farming this year in my woodframe’s backyard…

Any words of advice for other Wes students who might be interested in applying for a COE fellowship?
Apply apply apply! I really appreciated the flexibility of the fellowship. I was able to follow my interests as my research brought up new questions. I encourage you to scroll through the list of fellows and check out the huge array of projects people have been working on this summer. There are so many interesting projects out there waiting for you!