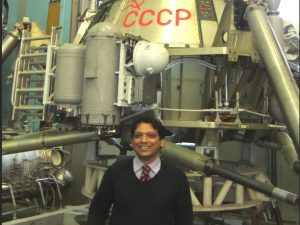 In his lecture, Siddiqi examined case studies of Cold War infrastructure built in the Global South to tell an alternate history of the Space Race. He argues that the big-picture struggles of global superpowers, as they chased utopian dreams of power on Earth and in space, created situations in the Global South reminiscent of colonial modes of exploitation, displacement, and erasure.

During the Space Race, these dreams were actualized through the building of departure gates, which Siddiqi defines as “the places on earth where humans have sought some form of exit, places where we have looked beyond the terrestrial through our machines, through our radio waves, or, in some cases, through our bodies themselves.” He also characterizes departure gates by “the footprint left behind by [their] placement…and technological infrastructure.” The departure gates he examined in this lecture mainly involved launch pads for satellites and rockets, as well as their associated scientific and military bases. 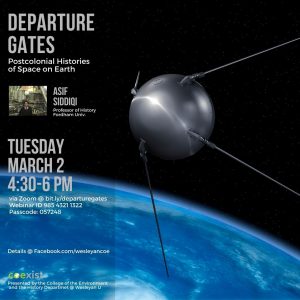 Siddiqi opened the lecture by orienting listeners to the ties between space exploration and colonialism in discussion of the case study of the San Marco project, which was a launching platform and base imagined and realized jointly by Italy and NASA off the coast of Kenya in the 1960s. He enumerated the rationale behind choosing this location, which ranged from the purely scientific (launching rockets close to the equator lends them added speed from Earth’s rotation) to the political (the San Marco pad, though only 5 kilometers from Kenyan shores, was technically in international waters). After familiarizing listeners with the logic behind choosing locations for departure gates, Siddiqi dived into discussing the forms of violence that these gates engender in the communities in which they are built.

Siddiqi began analyzing the impacts of the San Marco project on locals from its very inception. The location chosen for its base, near the city of Malindi, resulted in the displacement of the Bajuni, a local ethnic minority. Though their labor was used in the initial development of the San Marco project, they (and other Kenyans) were not allowed to participate in the actual running of the base nor in any of the scientific projects undertaken there. Furthermore, Siddiqi examined the devastating long-term consequences of the departure gate’s development on the health and safety of the Malindi populace. “Of course the example of San Marco was…more shocking than usual, but in many ways it wasn’t that exceptional,” Siddiqi said.

Siddiqi brought other examples into the discussion, such as Plesetsk, in the Russian Arctic, and the Vandenberg Air Force Base in California. The key similarities between the case studies were themes of displacement, resource extraction, and a lack of consent from or restitution to the local people affected by the departure gates. Siddiqi linked the various forms of “infrastructural violence” that these structures enacted on their locales, touching on the connections between societal and environmental types of damage. In the last section of the talk, Siddiqi situated departure gates within the wider context of the history of the Space Race. Both superpowers of the Cold War participated in structures of violence, particularly displacement, through the development of departure gates. These practices were reproduced across the globe through networks of experts, technology, and knowledge.

Siddiqi called attention to two aspects of his research that he finds particularly interesting: first, the large role of non-Western actors in the early days of space exploration, and second, the depth of conflict between Western and Global South nations during that period, which Siddiqi reflects on as “an extension of colonial practices.”