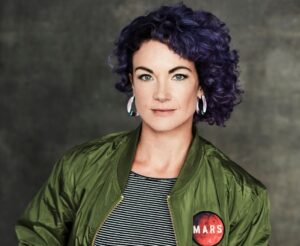 Walkowicz began the talk with a disclaimer about the fact that there would be “almost no science fiction” discussed, and they would instead be focusing on practical, real-world implications for how policing exists on Earth and how it could extend beyond Earth. An astronomer by training, their recent work has explored the social and ethical impacts of space exploration, and how those impacts manifest on Earth. “We’re going to spend a lot of time bouncing between the realms of space and the realms of Earth and back again,” they remarked after their introduction.

The beginning of the lecture focused on the idea of worldbuilding: the imagining, planning, and packing that goes into space exploration. Walkowicz conceptualizes worldbuilding as involving both on- and off-Earth planning, and discussed how scientists often use “an exercise in imagination that helps us build worlds,” such as the HI-SEAS experiment at Mauna Loa, Hawaiʻi. This practice of “weaving stories” about entities in space is based on both scientific and imagined facts. Walkowicz’s lecture focused on one specific aspect of worldbuilding: law enforcement in space scenarios. While discussion of this topic is often relegated to the realm of science fiction, seen in Star Cops (1987), Space Patrol (1950), etc., Walkowicz focused specifically on policing in space as a topic with concrete impacts on communities today, not just as a futuristic possibility.

Walkowicz questions the assumed presence of police in space, arguing that this assumption is in no way a neutral act: “The way you interpret the question [of what role police play in communities] is very heavily dependent not just on what your answer to this would be from a factual standpoint, but also… very influenced by race. When you think about things like, would you call 911? . . . Those are very influenced by race.” This lead to a discussion on the legitimacy of police, their history across racial boundaries, and who or what they are created to enforce. In the context of the U.S., Walkowicz asserts that the police “exist to enforce the current social and economic order of racial capitalism.”

Recognizing that there are no equivalent social or economic orders on Mars, as there are no humans there, Walkowicz argues that “the plans we make for Mars are also those we make for Earth.” Space activities are imagined, tested, and produced on Earth, which includes both the “rehearsal” and active practicing of the capitalist orders in our society. To this end, they differentiate between space as conceptual (where we project our futures) and space as physical (locations that exist both beyond and within human influence).

Next, Walkowicz raised the question: Where is space? The concrete delineation of these boundaries are important to the question of policing in space, as “the primary way that police enact the power of the state is through spatial containment.” Walkowicz points out that control of airspace was thought to be impossible before sufficient advances in air power technology. “But up to what point? There must be a ceiling, but there’s no real agreement as to what that ceiling is.” Walkowicz pointed to the Outer Space Treaty of 1967, which, while it doesn’t answer their question, does lay down many laws regarding what countries can and cannot do in space.

In regards to these laws, they also emphasized that “In many cases, when we’re talking about policing that is specifically for space, what we’re actually talking about is activities here on Earth.” They discussed the example of the United Arab Emirates’ Mars Science City, and their corresponding Autonomous Space Police, which will “provide policing to a place that isn’t even inhabited yet”, to illustrate the concept that plans “for Mars” are often plans for Earth.

The final topic discussed was the relationship between policing and the field of astronomy. Walkowicz focused on the persistent Kanaka Maoli resistance to the construction of telescopes on Maunakea, a mountain on the Big Island of Hawai’i. Recent conflicts center the Thirty Meter Telescope (TMT), an international telescope project slated for construction at the top of Maunakea. These protests, based heavily in the concept of kuleana (which Walkowicz describes as the authority, privilege, and responsibility one holds towards the land), fundamentally differ from the concepts intrinsic to Western ideas of policing that focus on spatial domination. “Astronomers tend to think of themselves as… separate from these ideas. But…they are not spectators to this construction,” says Walkowicz, concluding their argument that space exploration is used to justify violent policing on Earth. 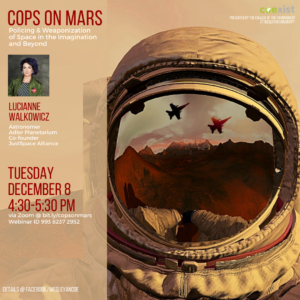 Lucianne Walkowicz is an astronomer at the Adler Planetarium in Chicago, and co-founder of the JustSpace Alliance. Walkowicz studies the ethics of space exploration, stellar magnetic activity, how stars influence a planet’s suitability as a host for alien life, and how to use advanced computing to discover unusual events in large astronomical data sets. In 2017-2018, Walkowicz served as the 5th Baruch S. Blumberg NASA/LOC Chair in Astrobiology. Walkowicz is also the founding director of the LSSTC Data Science Fellowship Program, an initiative to provide astronomy graduate students with training in advanced computing, and speaks and writes regularly on topics at the intersection of science and society, which have appeared on TED.com, Slate, The Washington Post, Vox, and more.

Walkowicz holds a BS in Physics and Astronomy from Johns Hopkins University, an MS and PhD in Astronomy from the University of Washington, and held postdoctoral fellowships at UC Berkeley and Princeton prior to joining the Adler Planetarium. They are also a TED Senior Fellow and a practicing artist, working in a variety of media, from performance to sound.