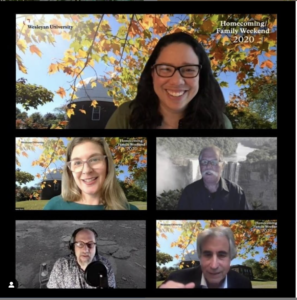 Venus was not proved to be completely different from Earth, as it was discovered that the two have incredibly similar diameters and mass. “We don’t know of any other pair of planets that are this similar. It’s very much a twin of Earth,” asserted Grinspoon. Similarities appear to dissipate, however, at the level of each planet’s surface: Venus is much hotter and much more pressurized than Earth, and appears to have 100,000 times less water. To Grinspoon, the question is then “What happened to Venus”? Scientists attribute Venus’s departure from Earth-like conditions to the “runaway greenhouse” effect. The heat from the early sun evaporated Venus’s water, which resulted in increased heat absorption, which led to more evaporation, in a vicious cycle that not only caused its current immense surface temperature, but also ended up allowing much of the planet’s hydrogen to escape its atmosphere. This suffices to explain both its hotness and dryness, i.e. its loss of habitability.

Recently, says Grinspoon, scientists have started to recognize this process, and therefore Venus’s departure from Earth, as being much more recent in Venus’s planetary history than we thought. Since the launching of the Magellan spacecraft in 1989, we have discovered that Venus is an active, volcanic planet. “Venus has been, and still is, active,” Grinspoon states. “This means that Venus’s atmosphere is undergoing cyclic transformations.” This leads to the notion of a “possible habitable zone in the clouds of Venus.”

Drawing on a paper to which he contributed in 2016, Grinspoon declares that Venus may have even been habitable before the Earth was, only becoming uninhabitable in the last billion years or so (on the planetary scale, a small period). These two discoveries open up the possibility of “life having migrated to the clouds,” as there is a region in Venus’s upper cloud layer that has similar temperature and pressure conditions to Earth’s surface. It isn’t just the temperature and pressure there that are conducive to life; there are also “nutrient and energy sources, known elements required for life.” Life on (or above) Venus was initially a fringe idea, but the very recent discovery of Phosphine gas in the clouds of Venus (published September 2020), which, barring all organic explanations “should not be there,” is making the hypothesis more plausible. “If there really is Phosphene there, we’ve found a gas on Venus that is understood to be a biosignature, which means either some previously unknown process is producing it, or there might be life,” suggests Grinspoon. On this provocative note, the suggestion that Venus might be not only inhabitable but inhabited, Grinspoon turned the presentation over to Professor Gilmore.

Gilmore paused at the beginning of her presentation to remark on her experience working with the COE Think Tank, which “is one of [her] favorite things [she’s] ever done in [her] twenty years at Wesleyan,” praising its interdisciplinarity and open-endedness. Directly treating the subject of habitability, Gilmore began by introducing the geological concept of vulcanism, a process by which volatiles (such as water vapor) trapped within the earth are released into the atmosphere. “Volcanic activity is a central component of maintaining an atmosphere over geologic time,” Gilmore says. Venus’s size, which correlates with its vulcanism, makes it capable of both providing the heat and atmosphere necessary for life. “[Though we may] search across the galaxy for planets that look like Earth … Venus is the only [one] we’ll ever touch,” Gilmore paraphrases from colleague Stephen Kane. The geologic activity predicted by its close resemblance to Earth has begun to be detected by scientists. Gilmore cites her own 2015 study demonstrating the possibility of silica-rich crust, which Earth geology tells us has water as a prerequisite. Further studies even suggest oceans existed for a long span of Venus’s history. “This is why planetary scientists matter,” emphasized Gilmore. “The answer [to the question of Phosphene gas] is either going to be: life, maybe, or another way to make phosphene. This just happened with Mars [and methane].” Gilmore pressed the importance of both US and international Venus programs to address these questions we are “just on the cusp” of answering. Gilmore’s proposed mission study aims to answer questions about the habitability of Venus. “Hopefully,” she concluded, “we should know by late April 2021 whether [our proposed programs] will fly.”