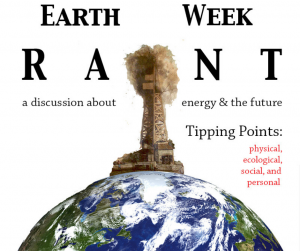 On April 18, 2019, Brian Stewart, professor of physics, environmental studies, and integrative sciences, hosted his 12th Annual Earth Week Rant on the subject of “Tipping Points: Physical, Ecological, Social, and Personal.” His yearly talks inform the greater Wesleyan community on the evolution of climate change and challenge them to actively work to counter its effects.

This year, Stewart’s talk focused on tipping points, “gateways to a new system status,” which mark moments after which change is irreversible regardless of human action. A major issue with reaching these points is that they often create domino effects of environmental damage that can quickly spiral downwards. Because environmental issues typically grow in magnitude rather than dissipate over time, there is a constant need to re-evaluate concerns, available resources, and potential actions. “The burden of addressing the issues we face lies with a small portion of us,” began Stewart, emphasizing the necessity for those with education, time, and other privileges to step up to bat for environmentalism.

Stewart’s talk began by examining recent physical tipping points. These can be pointed to as undeniable evidence of change, and include the melting of permafrost at the poles and high latitudes, which in turn raises sea levels, destabilizes land, and releases methane into the atmosphere. Even seemingly smaller-scale issues, like instability in the jet stream air current, can result in population destabilization and other effects that cause far-reaching ripples in ecosystems.

This led the talk to ecological tipping points, specifically a phenomenon known as “the insect apocalypse,” which refers to the silent but steady decline in the insect population. Stewart argued that if some of Earth’s hardiest creatures are starting to die, humans need to take note. “[The insect apocalypse] isn’t climate change’s fault. It’s caused by our remaking of Earth’s surface…we are undertaking a grand experiment to see whether or not we can survive after sterilizing the earth.”

“So, why aren’t we doing anything?” After discussing physical and ecological tipping points, Stewart moved onto the question that has been confounding environmentalists for decades: Why aren’t we taking immediate, monumental steps to counteract climate change? The social tipping point—the point where humans as a society decide to act—seems yet to come. He called on economists and industries, arguing that they “must consider externalities in their work.” Externalities are commonly described as “side effects” of an industrial activity—but Stewart argues there is no such thing, and that every consequence should be considered as equally valid effects. As it stands, externalities are rarely reflected in the costs of industrial or commercial activity. Stewart argues that if these environmental externalities are taken into account, the notion of “circular economies” will be recognized as unsustainable. “What no one seems to realize is that they break the second law of thermodynamics,” he said. “The outputs of a systems are always degraded from the inputs.” With this in mind, it is evident that an economy that does not actively take into account its environmental costs will eventually burn through the resources available to the system. He also touched on how some of the toughest questions regarding environmental disaster are often pushed to the side in politics, saying, “The one thing liberals and conservatives can agree on is that nothing must be done about the issue of the human population.”

Finally, Stewart asked, “When will you take action? To what extent?” Though he agrees that climate change is a systemic issue, he argues that the onus is on the privileged few, with time, energy, and money to make the issue a priority. He examined the Overton Window, aka the window of discourse, which refers to the range of ideas that are tolerated in public or political discourse. “We only discuss things in that certain window of extremity,” Stewart explained, “but young people like Greta Thunberg and Alexandria Ocasio-Cortez are forcing issues into our faces from outside that window that we need to talk about. Our window for environmental issues is too narrow.” He addressed the sense of hopelessness that can grow from the deluge of environmental reports, urging the audience to take small steps for environmentalism, beginning with calling out “anti-climate” talk when they encounter it in conversation. Those who can act in larger ways must realize this is the time to do so—before a final tipping point is reached. In closing, Stewart urged for perseverance, reminding the audience that “It’s not appropriate to give up unless you’re dead.”

If you missed it: Brian Stewart will present Tipping Points in the Climate, Nature, Society and Ourselves on May 20 at the deKoven House Community Center, 27 Washington Street, Middletown, Connecticut, from 7 to 8:30 pm.