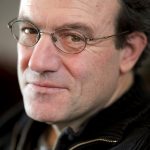 Siebert is a Professor of Practice of Literature and Creative Writing at New York University Abu Dhabi as well as an accomplished essayist, journalist, poet, and author. He is a contributing writer to the New York Times (including 14 cover stories) and has also written for The New Yorker, Harper’s Magazine, and National Geographic, among other publications. His three critically acclaimed memoirs (The Wauchula Woods Accord: Toward A New Understanding of Animals, A Man After His Own Heart, and Wickerby: An Urban Pastoral) and other writings offer insight into our relationships with animals, the natural world, and each other.