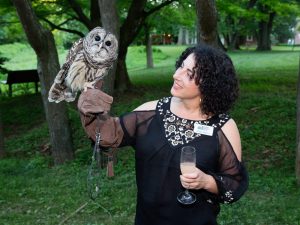 Alison Bidwell Pearce ’94 is an ecological anthropologist working to restore the ecological communities of Woodend Nature Sanctuary in Chevy Chase, Maryland, and spread an environmental ethos in the DC region.

How did you get interested in environmental issues? Were you an eco-conscious child?

Growing up in fairly urban New Jersey, I didn’t have a lot of exposure to nature. But my mother was an animal lover who donated to the Nature Conservancy and other environmental organizations. I loved looking through their publications and hoped to see some of the beautiful places pictured in them.

Why did you choose to major in environmental studies?

I was an environmental science major at Wesleyan, class of 1994.  At the time the department was Earth & Environmental Sciences with two tracks. I realize now that I was most interested in ecology, but I didn’t really understand how various environmental fields related to each other at the time. While I did not have a second major, I was also very interested in literature and writing. Some of my favorite courses were in Russian Literature with [now Professor of Russian Language and Literature, Emerita] Priscilla Meyer. As it turned out, I married another Wesleyan grad, James Pearce ’98, who also has fond memories of her classes.

Was there a class or a professor who influenced your direction? Or an “ah-ha” moment here at Wes?

[Now Harold T. Stearns Professor of Earth Science] Joop Varekamp was my thesis advisor. He and his wife, Ellen Thomas, were amazing mentors for several of us in the program. We spent many hours together in the field and in the lab. They involved undergraduate students in all of their research projects—not just as lab techs, but as collaborators. Joop and Ellen even listed Koren Nydick and myself as first authors on a paper, with their own names following. I’m not sure I understood at the time just how generous a gesture that is in academics.

Joop believed in us and equipped us with the skills to design and execute scientific investigation. He nominated me for University Honors in my senior year, an honor I never expected. And I will never forget Joop’s help on the day I submitted my thesis. I was having formatting problems with my figures and tables.  I’d been pulling long nights for days and was barely functioning. I called Joop to tell him that I didn’t think I could get the copies in by the deadline. He came immediately to help me literally cut, paste and photocopy (it was 1994) my figures and collate pages until I had all the copies ready to be bound.

Tell us about your thesis.

My thesis was titled, “The evolution of the Dennis Creek Salt Marsh under the influence of relative sea level rise.” It was a lot more fun than it sounds. We traveled in the E&ES van to salt marshes, first in Guilford, Connecticut, and then in Cape May, New Jersey. We squelched through the muck to take core samples at different elevations in the marsh to a depth of about two meters. Sometimes we would have to ask permission to cross private property to get to a part of the marsh we needed to sample. I remember one grumpy gentleman who finally permitted us access after we swore we weren’t “some of those birdwatchers.” I’d come home stinking of sulphur and my English major housemates would make me change clothes on the porch before coming inside.

Back in the lab we analyzed the cores for three types of signatures: chemical, vegetative, and faunal. Each zone of a marsh in terms of height above sea level has different grass species, foraminifera species, and chemistry determined by the frequency of salt water flooding. Tracking these changes in a vertical core allowed us to generate a relative sea level rise curve for about 500AD to the present.

How did you get from Wesleyan to your current role at the Audubon Naturalist Society?

After Wesleyan I lived in DC for about a year, working for two environmental nonprofits on the Hill. I learned that national politics was not my scene. I then spent two years as an agroforesty volunteer in El Salvador with the Peace Corps. I lived in a coastal village and worked with farmers to incorporate trees into their farming practices as fruit orchards and live fence posts. I also worked with women on home vegetable gardens and taught an environmental education curriculum in the elementary school.

During that time I became interested in how human communities related to natural communities.This led me to study ecological anthropology at Stanford. I had two lines of research at Stanford. First, I studied forest management by the indigenous Cuna of Panama. But my dissertation research examined the history of family ranches in a mountain valley in Montana. Three weeks after submitting my PhD my first son was born. My husband, James Pearce ’98, had just completed his PhD at Stanford in economics and his career brought us to Washington, DC. I started working at the Audubon Naturalist Society as a part-time naturalist while my kids were babies and my career evolved along with the organization.

What are you working on now?

A few years ago the Audubon Naturalist Society completed a 50-year master plan for the Woodend Nature Sanctuary, which is our headquarters. My job as the Restoration Director is to implement the habitat and visitor experience improvements of that plan.   Given its location inside the DC beltway, the meadows, forest, and small stream of the 40-acre sanctuary have been degraded by various urban pressures. Perhaps ironically, one of the main threats to eastern deciduous forests is overly abundant white-tailed deer. At Woodend we had about one deer per acre, which far exceeds the carrying capacity of about 20 deer per square mile that ecologists have defined as the limit beyond which deer browsing degrades habitat for other species. So our first restoration project was to construct a deer exclusion fence around 33 acres of the sanctuary. We organized about 100 volunteers to herd the deer out of the exclosure onto the other 7 acres of the sanctuary. Next, we began a massive removal of invasive shrubs a like bush honeysuckle, autumn olive, and burning bush. Now we are working to restore the forest understory with native ground layer plants, shrubs, and tree seedlings, since the deer had eliminated all native vegetation below five feet. In the next three years we will also replace European grasses with native species in four acres of meadow, as well as stabilize the eroded banks of our stream with a step-pool conveyance project.

Although my degree is in anthropology, I read a lot of environmental historians during my graduate work.  One of my favorites is William Cronon. I love his book Changes in the Land. In my job, I teach Maryland Master Naturalists and I always make them read his essay “The Trouble with Wilderness.” Another good read is the essay “Are You an Environmentalist or do you Work for a Living?” by Richard White, who I was lucky enough to have on my dissertation committee. Both of these authors grapple with the complex role of humans in Nature.

I have wonderful memories of the mountains of Montana, the beaches of Central America, and the redwood forests of California. But I’m a big proponent of appreciating the nature all around us. My daily dose of nature comes at Woodend, of course, but also in my own yard just outside of Washington, DC, that is brimming with native plants, songbirds, and daily visits from a red fox. A bit further afield, my family spends a lot of time in the Shenandoah Valley, where in another month I’ll be hunting for lady slipper orchids.