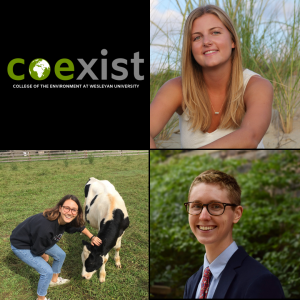 Each year, our COE Think Tank brings together Wes students and faculty from across the university, plus a noted outside scholar, for a yearlong conversation on a topic of vital environmental importance. This year’s focus: how humans relate to and value the non-human part of the world. Read on to discover how our three student fellows have been exploring the topic in their work.

“The modern understanding of infectious disease is the legacy of sweeping social and medical changes that took place in the late 19th and early 20th centuries. In this era, the “socialism of the microbe” developed, the understanding that because the disease of one can become the disease of all, maintaining the health of all social groups, regardless of economic status, is critical for a healthy society. While military metaphors of illness, common in Progressive-era campaigns, still structure the discourse of disease, disease prevention has become a highly individualized pursuit. Environmental health hazards, such as air pollution, drinking water contamination, and antibiotic resistance constitute major sources of sickness, but these issues are too often ignored and the communities they impact marginalized and dismissed. Reimagining the metaphors of infectious disease for an environmental context and reinvigorating the “socialism of the microbe” creates powerful tools with which to address environmental health issues as the responsibility of all.

My work in the Think Tank focuses on analyzing the historical roots of modern metaphors of disease and investigating how those language choices diverge from descriptions of climate change and environmental health hazards. Does the way we describe and imagine climate change rob it of necessary urgency? Does the historical model of campaigns against infectious diseases like typhoid and tuberculosis provide an appropriate model for motivating environmental action?”

“My thesis research is focused on investigating how conservation efforts transform geospatial realities for indigenous communities, both in terms of physical access to land and in terms of cultural and political recognition. I am studying historical and contemporary environmentalism in the United States, focusing on the political and ideological structures that guide public land management. My thesis is grounded in a critical analysis of wilderness as a culturally constructed ideology, investigating how rhetorical conventions that portray wilderness as “pure” and “uninhabited” write both the historical and contemporary presence of indigenous peoples out of landscape. I am also looking at how land conservation projects require physical boundaries to be drawn space which, in turn, establishes various conceptual binaries such as those between the protected and the non-protected, the wild and the tame, and the preserved versus the exploitable. Guided by these philosophical pursuits, I am studying the unprecedented federal protection and subsequent dismantling of Bears Ears National Monument as the central case study for my thesis, through which I am looking at the region’s historical and cultural significance to indigenous peoples as well as the detrimental effects that extractive industries, irresponsible governance, and social indifference towards Native spirituality and sacred sites have had on the landscape in Southwest. Working at the intersection of environmentalism and indigenous politics, I hope to encourage an environmental ethic that links land conservation with a responsibility to honor the indigenous history and spiritual importance of place and landscape.” Read about McLeod’s recent Bears Ears photo exhibition here.

“For my thesis, I am exploring spirituality’s place in end of life care through the role of the chaplain. In speaking with chaplains, hospice care volunteers, doctors, and pastoral care providers I am trying to work out the objectives and expectations placed on chaplains by the secular institution of the hospice. How do chaplains assert (or conceal) their religiosity within the secular and scientific sphere of the hospice? And how does their presence within the hospice challenge (or reaffirm) conceptions of secular and religious space? On a more philosophical level, I am also investigating the way divisions between mind and body are negotiated by hospice chaplains compared to the larger care team. How do chaplains attempt to help people facing deteriorating health and increasing pain do so with less fear and dread? My intention with this thesis is to shed greater light on the way religion and religious language/frameworks are operating in secular spaces, as well as to uncover what focusing on the role of the chaplain can reveal to both those working inside and outside of medicine about how to care for those whose treatment is no longer deemed ‘sustainable.’ “